How To Know If It Is Gallbladder Pain

How To Know If It Is Gallbladder Pain 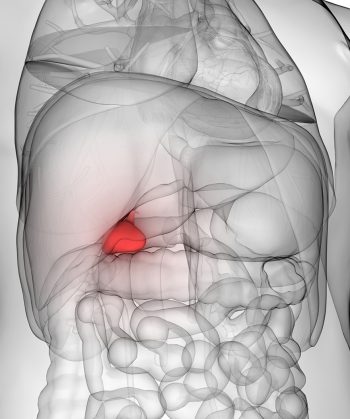 What Is The Gallbladder?

A similar duct connects from the pancreas into the common bile duct. The liver secretes bile which is a greenish brown liquid containing salts, pigments and cholesterol. Bile is concentrated and stored up in the gallbladder for release when needed.

When we eat food containing fats, a hormone response triggers the gallbladder to squeeze and release its contents in a measured volume. Bile reaches the top of the lower intestine just as food is leaving the stomach. This is why a dysfunctional, sluggish or blocked gallbladder will bring on pain an hour or more after eating.

Most often, gallbladder pain is felt at or near the location of the gallbladder in the upper right abdomen, or mid, upper abdomen. The pain can also be felt in the mid back. Less obvious is the related discomfort that can be felt between the shoulder blades, in the right shoulder or even the chest.

Pain will sometimes refer to these areas because the gallbladder is close to a nerve which travels the length of these body areas. Swelling and pressure in the gallbladder related to a blockage can put pressure on the nerve and create confusing pain in seemingly unrelated areas.

Also called biliary colic, a gallbladder attack is often described as an aching, gnawing pain Unfortunately, conventional, over the counter pain medications rarely help because the pain is deeply visceral, or nerve-related.

It will begin an hour or two after eating, build up over 15-30 minutes and usually peak there before slowly resolving. A gallbladder attack may last a few hours, though more severe cholecystitis pain can last several hours and indicates a more serious problem of inflamed gallbladder tissue.

Indigestion or stomach pain related to food sensitivities, food poisoning or other issues will usually begin shortly after eating and may involve diarrhea, lower abdominal pain and nausea. Though gallbladder attacks can cause nausea, vomiting doesn’t usually relieve the symptom, nor do bowel movements relieve the abdominal pain.

It is worth noting that Pancreatitis- pancreas inflammation due to a blockage- can also cause symptoms similar to biliary colic. Most people don’t know how to differentiate between gallbladder pain and pancreatic pain symptoms, but the natural home remedies designed to decrease inflammation, flush blockages and increase bile flow, will usually help, especially if combined with a gallbladder diet.